The St. Louis Southwestern #819 4-8-4 steam locomotive, completed in 1943, was the final locomotive constructed by the Cotton Belt's own staff of mechanical engineers, mechanical officers, foremen and workers in the company shops at Pine Bluff, Arkansas. It rolled into service on February 8, 1943, the last locomotive built in Arkansas.

The problem of getting the locomotive moved to a display area in Oakland Park was solved when Cotton Belt agreed to lend materials for a temporary spur. Cotton Belt and Missouri Pacific employees contributed the labor in building the spur and moving the historic locomotive and its tender.

I have a strong connection with the move of #819. My uncle, Doyle S. Gibson, was a civil engineer working for the Cotton Belt at the time, and was involved in the design of the logistics involved in moving the locomotive. I visited him in Pine Bluff at the time, and recall the work he did in transitioning the engine to the park. Doyle was also involved in building the Pine Bluff Gravity Yard.

The engine remained on static display for nearly 30 years, but bore the brunt of neglect, rust, graffiti, and vandals who stole brass parts.

In December of 1983 a group of Cotton Belt employees, volunteers, rail fans and rail historical groups placed Engine 819 back on Cotton Belt rails for the first time in nearly three decades. The engine was moved from its former display back to the site of its construction 40 years earlier. Volunteers spent three years and 37,000 hours of time, and used $140,000 in donated materials, in restoring the engine. Bill Bailey, a civil engineer from Little Rock, presided over the restoration project.

On April 6, 1986, Engine 819 moved out of the Cotton Belt Route's yard at Pine Bluff marking the first time it had moved under its own power since 1953. For the next 15 years, the locomotive traveled on numerous excursions.

The mighty engine was placed on the National Register of Historic Places on May 18, 2003. 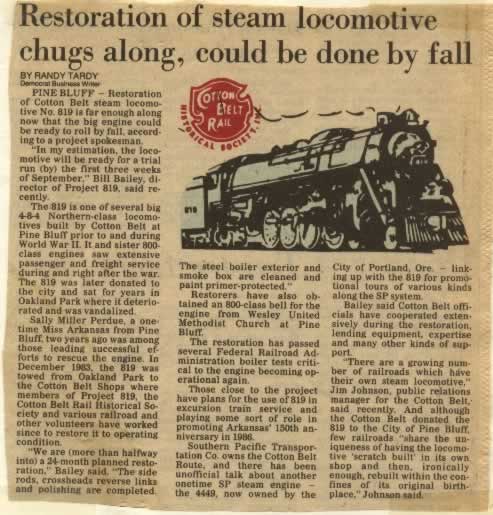