One of the most significant rail yard changes in the history of the Cotton Belt took place in 1957 when the building of a modern electronic gravity yard was begun in Pine Bluff, Arkansas, a central location on the railroad. This large freight classification yard, opened on December 18, 1958, was built at a cost of $5.5 million. My uncle, Doyle S. Gibson, played an important role in building this important Cotton Belt facility.

Modern features of the time included radios, intercoms, pneumatic tube systems among towers and other buildings, yardmaster's tower, and flood lighting for 24 hour a day operation. Push button controls guide cars through the system to the desired classification tracks via automatic power switches.

Twenty-eight classifications tracks support a total of capacity of 1,300 rail cars, but the design included the ability to expand to forty classification tracks.

The design also featured tracks to repair 70 freight cars, and a cleaning track to hold 56 cars. Electronic signs at each end of the yard light up the number of the track which each arriving train will pull.

Trains are pulled out of the receiving tracks by "hump engines" past the hump tower, toward the Arkansas River Bridge, and then are shoved over the hump at 2 miles-per-hour.

As cars descend by gravity down the grade on their way to various classification tracks, electronic equipment takes over. Computers feed information to retarders or braking devices on the tracks which apply necessary braking pressure to slow the cars down to a speed that will insure gentle coupling to other cars.

Shown below is an artist's sketch of the Gravity Yard. 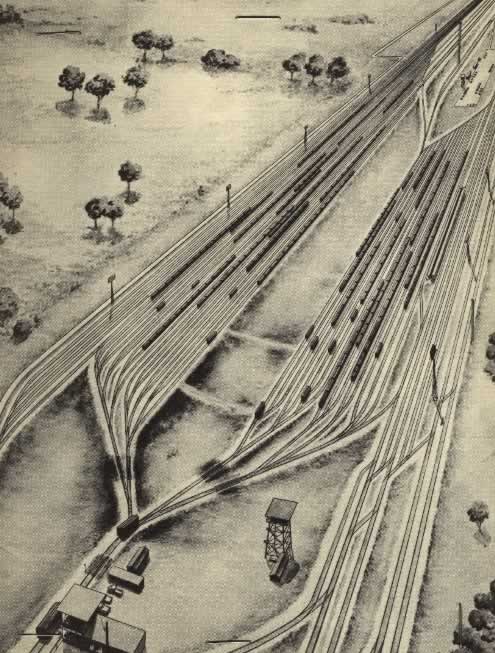 Shown below are original photographs taken on March, 31, 1958 of the gravity yard under construction, provided by the Doyle S. Gibson Collection.