The Blackstone Hotel in Downtown Tyler

The 5-story Blackstone Hotel was constructed at a cost of $500,000, and opened in downtown Tyler at the corner of Broadway Avenue and East Locust Street on November 29, 1922.

A 9-story addition was completed in the 1930s, providing 64 additional rooms. Air conditioning was also added.

In 1955 the hotel was renovated and enlarged again, adding an east wing of 30 rooms and a parking garage. The outside facade was changed to include New Orleans-style wrought-iron features (see postcard below). 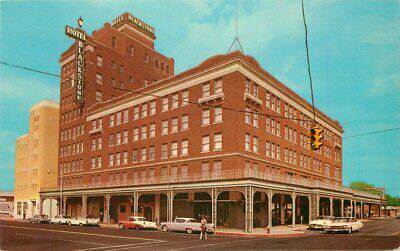 The hotel was closed on December 31, 1975, and imploded in October of 1985
(watch a YouTube video of the Hotel Blackstone implosion) 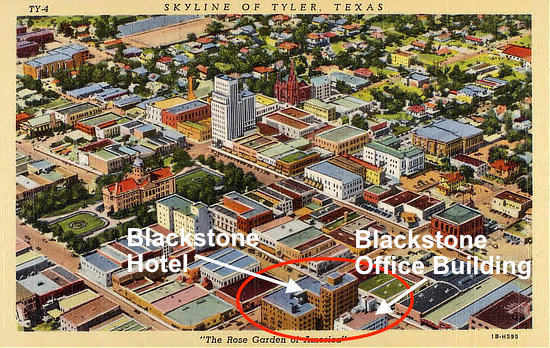 In 1938, construction began on the 6-story Blackstone Office Building to the north of the hotel, at a cost of $100,000. It was built in response to state and local demands for more office space as the oil boom brought new business to Tyler. Construction was completed in 1939, and replaced a large 19th century residence still in use as a boarding house in the mid-1930s.

The building was a free-standing structure, not attached to the hotel. It featured a distinctive tower on the southwest corner of the building. It was one of the first office buildings, if not the first, in Tyler to be air conditioned.

The building was also the location of the Tyler Union Bus Terminal from the late 1930s to the 1950s. With Tyler's bus station on the first floor throughout World War II, the Blackstone Building was a busy place, with thousands of military personnel accessing nearby Camp Fannin. The bus terminal facilities on the first floor were remodeled into offices during the 1960s.

Interior office spaces on floors two through six were rehabilitated in 1998 for office use, with original interior doors, perimeter wall surfaces and elevators retained. During the 1998 rehabilitation the first floor was changed into a lobby area with reception and meeting rooms and finished with Art Deco influenced stone, tile and metal detailing.

A small one-story addition at the rear of the building contains offices and The Genecov Meeting Room. It was erected about 1965 and enclosed the original bus passenger loading area.

Present-day view of the Blackstone Office Building, Line Street Entrance, with The Genecov Meeting Room to the left

The building was added to the National Register of Historic Places in 2002.

The Blackstone Office Building is still occupied and in use today, by the Tyler Chamber of Commerce, Tyler Economic Development Council, GroupM7, and other tenants, at 315 North Broadway Avenue.

Read the Blackstone Office Building's Application to the National Register of Historic Places. 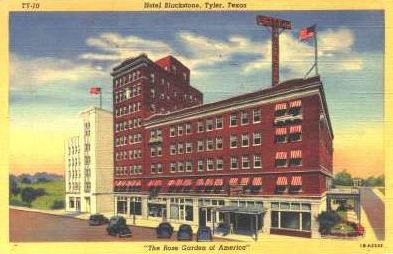 Blackstone Office Building, 315 N. Broadway Avenue, with the Blackstone Hotel to the south


The Carlton Hotel in Downtown Tyler

The 16-story Carlton Hotel opened in downtown Tyler at the corner of Broadway Avenue and Elm Street on November 20, 1954. Built at a cost of $1.8 million, the Carlton was a 200-room, full-service hotel that hosted functions including banquets and school proms.

The hotel's amenities included a coffee shop which seated 120 people, a ballroom, meeting halls, a main dining room and three private dining rooms. The 115,000-square-foot structure also featured a three-story, 126-space parking garage, as well as a rooftop swimming pool and cabana that were added in 1955.

A glitzy opening featured a floor show featuring film star Gloria de Haven and bandleader Joe Reichman. A crowd of about 4,000 persons visited the Carlton during its opening weekend.

The Carlton Hotel closed on November 18, 1971 after serving Tyler residents and visitors for 17 years. It housed Smith County offices beginning in 1977, but is currently abandoned.

It was announced in October of 2021 that a new project is being launched to restore the Carlton. The project will be a joint effort by Tyler-based Fitzpatrick Architects and NORF Companies of New Orleans. The restored structure will feature mixed-use, multi-family housing with more than 100 residential units. It will also have commercial space, a rooftop pool, and a cabana.

As Tyler grew and expanded, stays at downtown hotels started to decline. The Carlton Hotel closed in 1971, and The Blackstone Hotel in 1975 along with The Plaza Hotel.

A new lodging model was emerging: Motor Courts, Motor Hotels, or "Motels". More people had automobiles, and wanted the flexibility to park near their lodging. In Tyler, Alamo Plaza opened in the 1800 Block of W. Erwin Street, along with others around town, like these ... 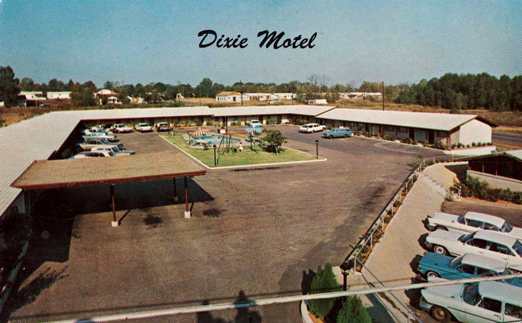