A highlight of each spring season in East Texas is the 10-mile long Tyler Azalea Trail guiding visitors through neighborhoods of quaint brick streets, historic homes, and residential gardens filled with blooming azaleas, dogwoods and tulips.

History of Azaleas in Tyler

The first Azaleas were planted in Tyler in 1929 by Maurice Shamburger, in the Lindsey Lane area. Other neighbors soon followed, and the area became well known for its springtime beauty.

Over the years the word spread across East Texas and beyond about Tyler azaleas. In 1960, the first marked tour routes were established to help guide tourists.

Today, over 100,000 people from all over the USA visit Tyler each spring to attend the Azalea Trail. Two marked routes exist today: the Lindsey Trail and the Dobbs Trail (see area map below).

What to See Along the Azalea Trails

The trails also display a high concentration of white and pink Dogwoods, Redbud trees, Japanese Maples, and spring bulbs such as tulips and daffodils.

Featured along the trails is the Azalea National Historic District, established in 2003, and listed on the National Register of Historic Places. It comprises about 950 homes built in the first half of the 20th century, with a large concentration of structures from the 1930s when the oil boom had a huge economic impact on Tyler.

The two trails officially begin at the Tyler Convention & Visitors Bureau, at 315 N. Broadway, and travel south. A good starting point is the corner of Houston Street and South Broadway Avenue.

Markers designate the routes that meander through the area streets for motorists. Actually, you can begin anywhere along the routes and not be disappointed.

Parking is generously provided by the First Presbyterian Church, near the corner of Dobbs and South Broadway.

For a map of the trails, visit the website of the Tyler Convention & Visitors Bureau or their offices.

The Trail is nationally recognized, and has been the subject of articles in publications such as Southern Living and Texas Highways.

The official greeters of the Azalea Trail are known as the Azalea Belles, young women from the local area who serve as Tyler ambassadors along the trails. The Belles, dressed in antebellum gowns, have an opportunity to promote Tyler, greet visitors and pose for photographs in front of scenic azaleas and spring flowers in the historic Brick Street District.

The Belles are 9th and 10th grade students and are chosen each year from area high schools or home school families. It's an honor to be chosen as one of the Azalea Belles, a tradition that dates back many years.

Each participant is assigned a long antebellum style dress for the duration of the Trails. Two or three Belles are assigned to each posing location/home.

The photos  below were taken along the Tyler Azalea Trails. Blooms were well underway on azaleas, tulips, dogwoods, redbuds and other flowers and trees. 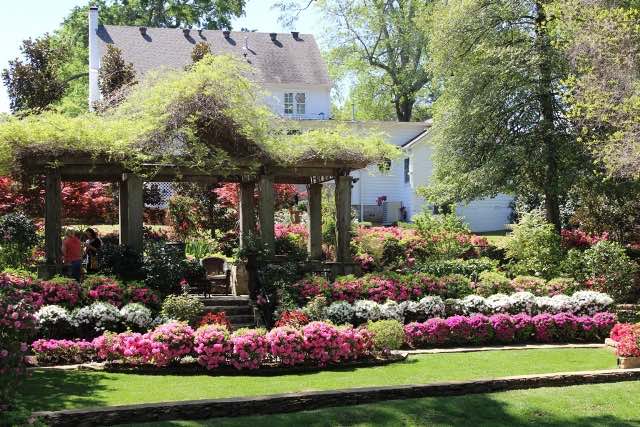 That Other Tyler Flower: The Rose

Tyler is also the Rose Capital of America, the location of the Tyler Rose Garden, the nation's largest municipal rose garden, and the site of the Annual Texas Rose Festival held each October.

At TylerTexasOnline, we love gardening, and landscaping, and East Texas is a great place for that pastime, especially during spring!

Among our favorite azaleas to grow, whether they are pink, salmon, red or white, have been Pride of Mobile, Formosa, George Tabor, Mrs. G.G. Gerbing, Christmas Cheer, Coral Bells and many others both in Tyler and in Louisiana.

For more flower photographs, be sure to view the Helen Lee Daffodil Garden photo gallery showcasing millions of beautiful daffodils blooming near Gladewater.

Are you a hummingbird lover like us? Check out the photos and hummingbird videos in our Hummingbird Central website. And be sure to visit our new butterfly website at www.ButterfliesAtHome.com

In addition to the Azalea Trail photo gallery shown below, we've also included various azalea varieties that we have grown over the years. All photographs were taken by the author.