The era of aviation in Tyler began after World War I when air corp veteran O.C. Palmer kept a small bi-plane on a grassy hill between South Broadway Avenue and Donnybrook Avenue, near the current site of Bergfeld Square. He took passengers for short flights over the city.

The Early Years in Tyler Aviation

The Tyler City Commission selected O.C. Palmer, a World War I pilot, to head a committee to develop an airport for Tyler. Subsequently, the city purchased 296 acres on the west side of Dixie drive for the site of the airport. Tyler's airport was dedicated on June 28, 1930 as Tyler Municipal Airport. No terminal building existed at that time. It was renamed Rhodes Field in 1934 in honor of Chamber of Commerce Manager Russell Rhodes.

Later, President Franklin D. Roosevelt changed the contractual system of air mail route awards, via the Air Mail Act of 1934. C. E. Woolman, a crop duster in Louisiana, and owner of the Delta Air Corporation, made the lowest bid for a new route from Dallas, and received the contract.

With only a few crop-dusters in his stable, Woolman purchased six Stinson "T" tri-motors from American Airlines, (formerly American Airways), which was moving up to larger Curtiss and Douglas equipment. Delta then began airmail service in 1934, between Dallas and Monroe Louisiana, via Tyler and Shreveport.

During World War II, the Tyler air field was leased from the City of Tyler by the U.S. Army Air Forces as a training base and renamed Pounds Field.

It was named in honor of 2nd Lt. Jack W. Pounds, a pilot instructor from Tyler who died in an air crash in 1942 during the early part of World War II while serving in California. He was the first officer from Tyler to die during the war.

When the airport was returned to the city after the end of the war, the name was kept.

The Post-War Aviation Era in Tyler

All mail service and passenger service had been suspended during the war. At the end of the war, in November 1945, the airfield was returned to civilian use under the control of the City of Tyler, and renamed Tyler Pounds Regional Airport.

Airmail and passenger service resumed in February, 1946. In 1949 construction began on a new terminal.

This airline began operations as Huff Daland Dusters, a crop dusting service, in Macon, Georgia in 1924, and moved to Monroe, Louisiana in 1925.

It started carrying passengers in late 1929 over a route from Dallas Love Field to Jackson, Mississippi, via Shreveport and Monroe, using three Travel Air six-seat monoplanes.

As additional planes were delivered from the factory, service was extended eastward to Birmingham, Alabama, and westward to Fort Worth.

Delta reached Atlanta in June 1930. Soon Huff Daland's 18 plane inventory was the largest privately owned fleet in the world. Collett E. Woolman purchased the company in 1928, and renamed it Delta Air Service for the Mississippi Delta region it served, and established headquarters in Monroe.

In 1941 the airline relocated its corporate offices to Atlanta, and was renamed Delta Air lines in 1945.

Delta Air Lines was the first airline company to serve Tyler, and continued to provide air service until 1957. In 1946, Chicago & Southern Airlines also began service to Tyler, but the company later merged with Delta in 1953.

One of our favorite airlines that served Pounds Airport over the years was Texas' own Trans Texas Airways (TTA). Many of us from that era will recall the airline's nicknames: "Tree Top Airlines" and "Tinker Toy Airlines".

Trans Texas Airways began service to Tyler in 1951, and terminated it in 1977.

The company remained under the TTA name until 1969 when it became Texas International Airlines (TIA), and evolved into a regional airline serving 66 cities in 6 states, and Mexico.

Completely rebuilt in 2002 at a cost of $17.6 million, the airport features on-site parking, rental car facilities and easy access from various areas of Tyler and East Texas. Tyler Pounds was named 2007 Airport of the Year for the State of Texas by the Federal Aviation Administration (FAA), and serves about 150,000 passengers per year.

Flights are offered to and from Tyler Pounds Airport by American Airlines, with flights to Dallas-Fort Worth International Airport (DFW) in the Dallas Metroplex.

Stewart Airport was begun about 1942 in the east section of Tyler by Walter E. Stewart. The 113 acre airport was located in the southeast corner of the intersection of East Erwin Street and current-day Loop 323 East.

The map below shows the approximate location of Stewart Airport in relation to the current Tyler street grid. The airport was closed sometime before 1960.

Television station KLTV began broadcasting in 1954, and was originally located on East Erwin Street at Loop 323 in a former hangar at Stewart Airport.

About Stewart Airport in Tyler

Other Known Airports and Landing Strips in South Tyler Texas

Older maps of south Tyler show at least three other airport landing strips, as shown in the maps below. 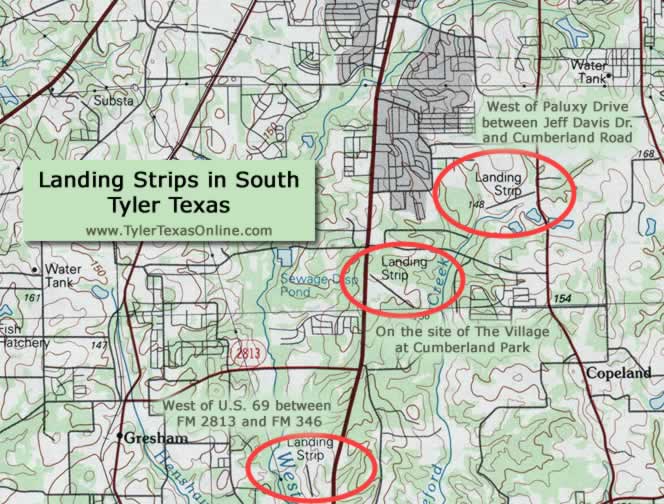 One landing strip existed just west of Paluxy Drive, FM 756, between Jeff Davis Drive and Cumberland Road. It is believed the strip was 3,000' in length, with an oiled surface. The abandoned air strip can still be seen today, in 2022. See map below for exact location. 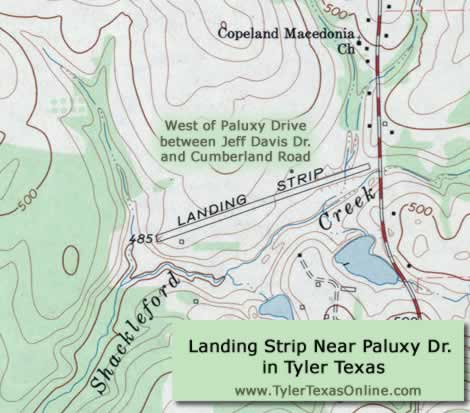 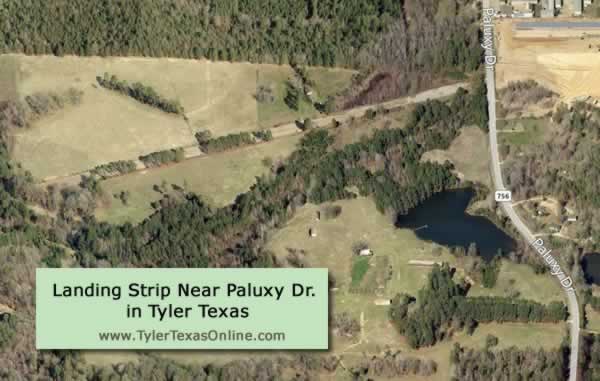 The Airport at Cumberland Park

Another airport landing strip was located on the present-day site of The Village at Cumberland Park, roughly at the northeast corner of U.S. 69 (South Broadway Avenue) and Toll Loop 49.

The map below shows the location of the air strip as it appeared in October of 2005 before construction of the new shopping center. It is estimated that the runway could have been as long as 2,700 feet. 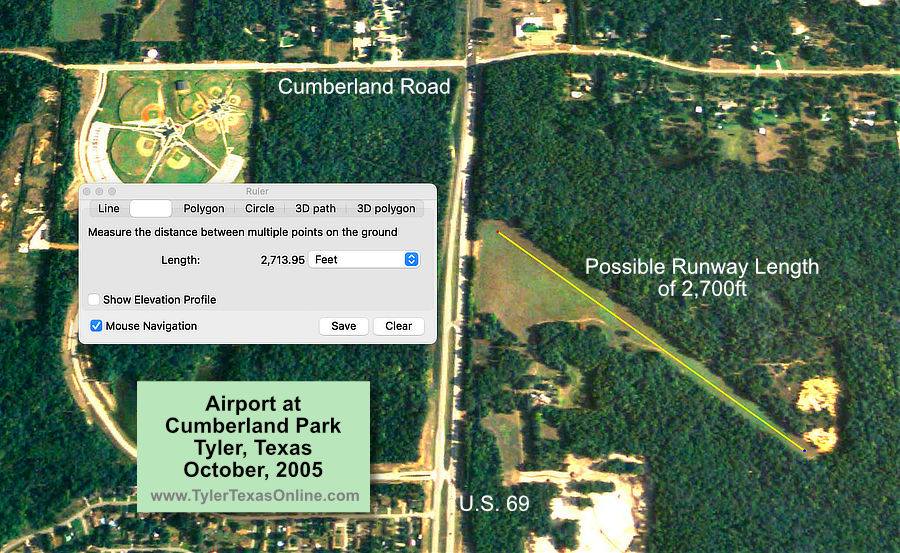 The map below shows the location of the air strip with an overlay of the outline of the Village at Cumberland Park which opened in 2014. Today, no remains of the landing strip are visible. 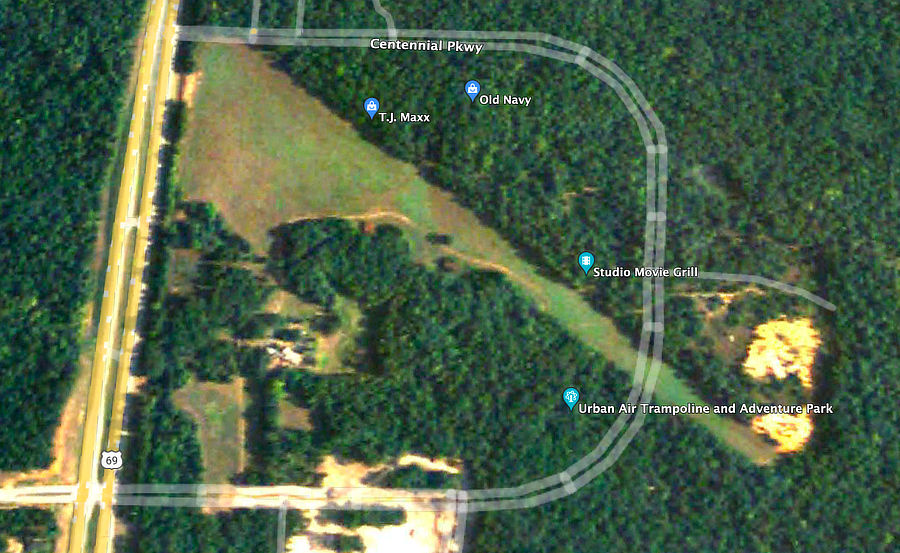 Pineridge Airport South of Toll Loop 49 Near Flint and Gresham

A third landing strip was located further south, on the west side of U.S. Highway 69, about half-way between FM 2813 and FM 346. The site is located east of the communities of Flint and Gresham. The sole turf runway 17/35 was 1,500ft in length, 30ft in width. It was known as Pineridge Airport, FAA Identifier 16TS, and is now closed. 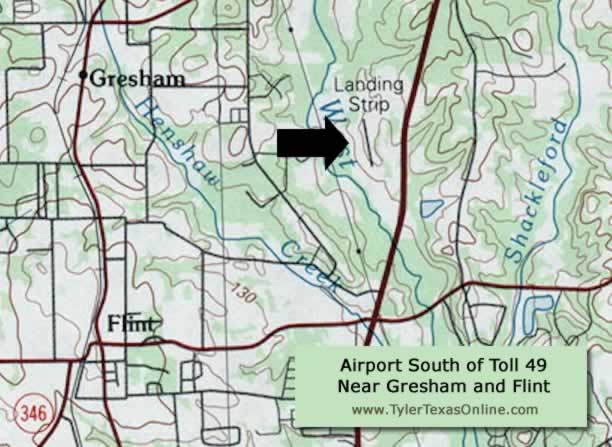 Southwest of Tyler, near Emerald Bay and Teaselville, was the Emerald Bay Airport. See map below for exact location. 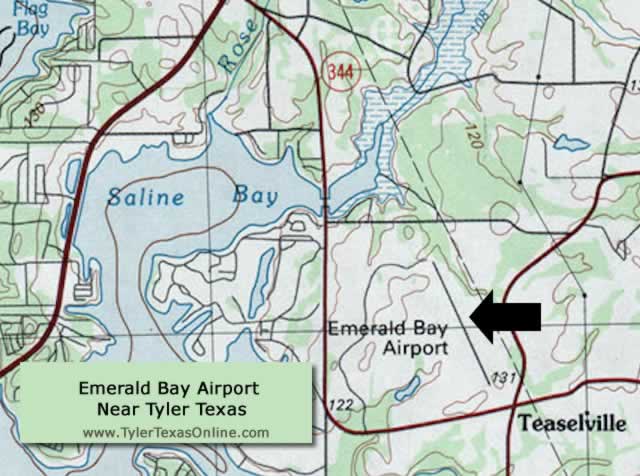 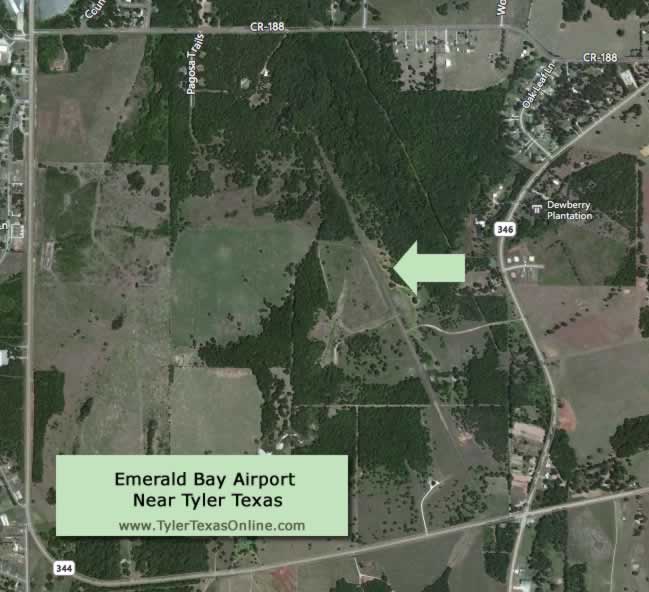 Its FAA Identifier is T25. Runway 9/27 has a Bermuda grass surface and is 3,100' x 60'. It is situated close to Blackburn Bay, part of Lake Palestine, between County Road 4117 and Hillside Circle. See map below for exact location. More info at AirNav 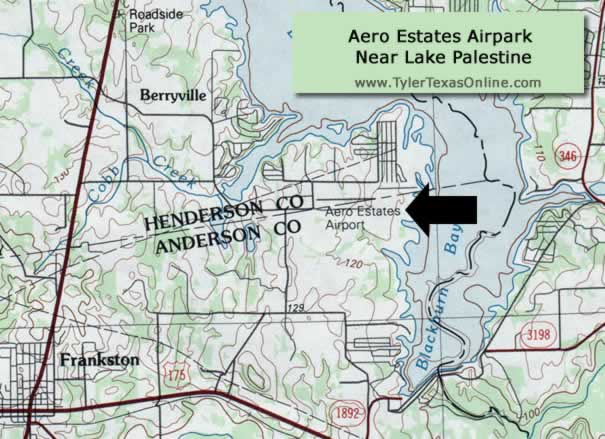 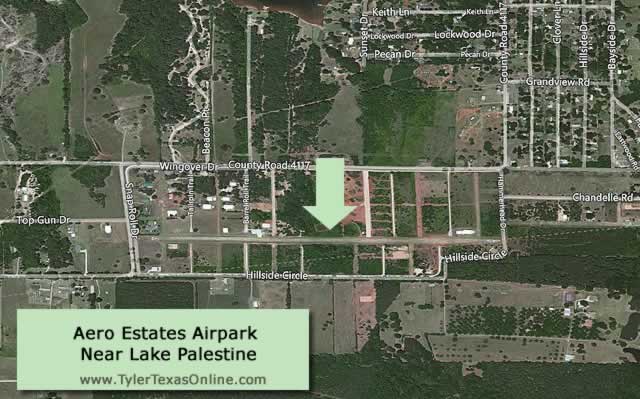 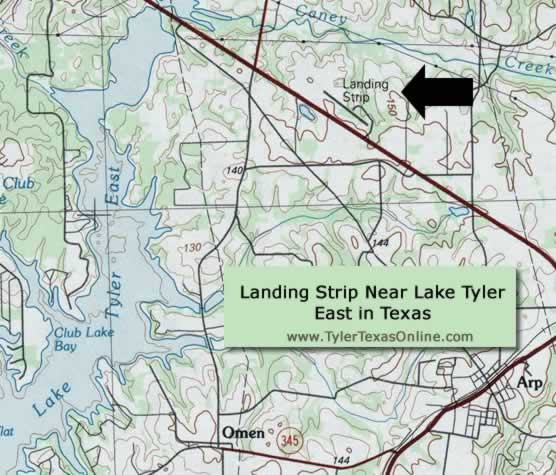 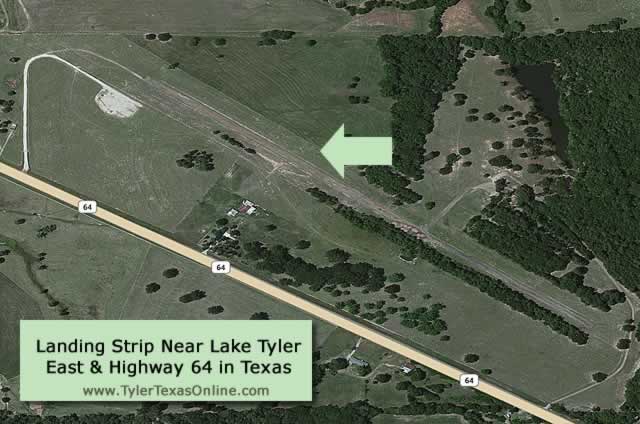 Further south, just west of U.S. 69, is another landing strip, located south of Bullard and 2 miles north of Mount Selman. 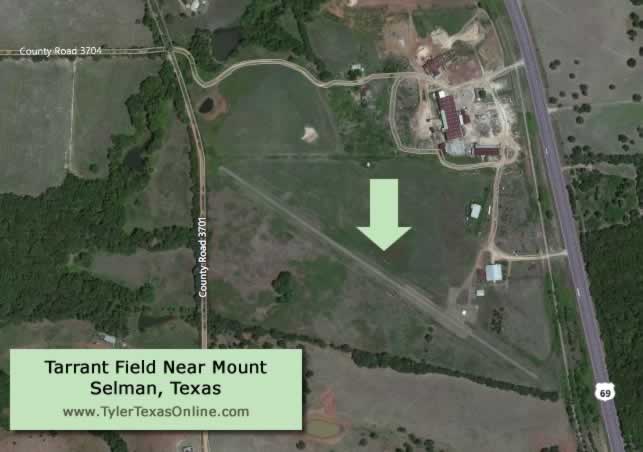 Other Airports in the Greater Tyler Area

For those interested in the history of Tyler aviation, and aviation in general, we recommend a visit to the Historic Aviation Memorial Museum (HAMM). This large, regional aviation museum is located at the Tyler Pounds Airport's old passenger terminal building.